The love and affection that Rob shows to his dogs are beyond impressive. There is no better example of what a good clear-headed obedient sport dog is if you were to meet his beloved Ado. Rob has always had a love of dogs and this drew him into the K9 world. He is a good handler and takes the time to travel the country to attend as many seminars as he can to continue learning different techniques and current training methods to keep his dogs on their toes. Competing in Protection Competitions has become a passion for Rob and his dogs. Rob served an honorable 4 years in the Army as Military Police. following that Rob served an additional 3 years in the civilian law enforcement sector.

Adam is a native of Northeast Arkansas. Whether it be dogs, farm animals, or wildlife Adam knew at an early age that he and God’s creatures had a special relation.

Adam served an honorable 5 years active duty in the Marine Corps and during his time of service, Adam was able to interact, train with, and serve alongside Military K9’s. Adam’s love for K9’s grew fonder when he became a Police Officer. Adam served as an officer for 5 years and always had an interest in one day, having his own K9 to work with. Adam feels that his prior service, supervision skills, and love for animals combined make him a great fit for the Joint Forces K9 Team.

Professional Dog Trainer/Decoy
Mike was born and raised in New York. When Mike discovered his passion for dogs he decided to turn his passion into a career. Mike travelled to St.Louis, Missouri to attend The Tom Rose School. While at the Tom Rose School Mike went through the Professional and Master dog training program where he learned all the in’s and out’s  of today’s modern training methods and techniques.

My name is Micah Lewis. I was born and raised in Ohio, but over the past couple of years, I’ve been in Virginia and now Oklahoma. Dogs have always been a massive part of my life since I was a little girl, and I knew I always wanted to work with them—anything from house pets to working dogs and police dogs. I attended a 10 week handler course in Va with Professional Canine Solutions and certified Hades as a single purpose K9 and got the chance to decoy for the other two dogs as well. I also got the chance to work for Off Leash K9 Training at their headquarters location and was there for 2 years. Upon moving to Oklahoma I was able to work alongside Canine Unlimited Of Tulsa and learn the ropes for police dogs. My former Mal (Thanos) is on a department currently and hopefully more in the future. I have two personal dogs, a German shepherd (Hades) and Dillon a Belgian Malinois that is a police prospect. I’m excited to work with the Team and be a part of Joint Forces K9!

Hello! My name is Madelyn, a Canadian native, but have lived most of my childhood/young adulthood at Fort Leonard Wood, MO. where my father retired from the Marine Corps in 2009.

I volunteered at the Waynesville Animal Shelter from 2011 until 2017 when I was hired as the lead trainer on staff. During my time at the shelter, I had many mentors and shadowed/ worked under many trainers who helped me certify my first personal dog as a Therapy Dog. My mentors also got me into the Show Dog (confirmation) world where I have shown, trained, and handled a variety of breeds in the ring.

I privately trained from 2017-2021 specializing in behavioral modifications. In 2018 I joined the United States Army as a Military Police Officer where I worked alongside and trained with Military Working Dogs. I was stationed in Germany where I had the opportunity to work alongside the foreign military and their working dog programs as well.

I have two personal dogs, both German Shepherds, Prada and Levitan, whom I train and compete within sports such as PSA, American Shutzhund, IGP, Confirmation, FastCAT, CAT, and Narcotics Detection.

I have years of hands-on training and experience in basic and advanced obedience, advanced off-leash, sporting/working dogs, and behavioral modifications.

My biggest goal is for you to have a happy and well-trained dog you feel confident with! 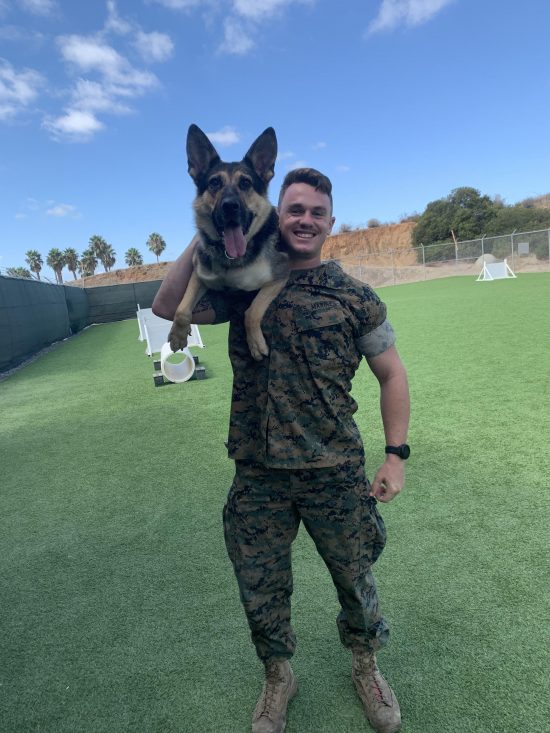 Alexander was born and raised in Wilbraham, Massachusetts. While growing up he was always outdoors. Whether he was outside playing with his dog or looking for different types of snakes and bugs to analyze. Alexander also would love to volunteer at the local places in his community such as Thomas J O’Connor Animal Control & Adoption Center, Life Care Center of Wilbraham, coaching youth sports teams, and many more.

After high school, he enlisted in the United States Marine Corps as a Military Police Officer where he was stationed at Camp Pendleton, California. While stationed there, Alexander was selected to attend the Basic Handlers course at Lackland Air-force Base in Texas to become a Military Working Dog handler. Shortly after completing that course and returning to California, he was selected to attend the Combat Tracking Dog Course which is a specialty school where he fell in love with tracking. Upon getting out of the military he decided to further his education for what he is passionate about by attending Starmark Academy’s Master Canine Trainer and Animal Behavior Course in Hutto, TX. While there Alexander became a certified Master Trainer and Animal Behavior Specialist, Advanced Pet CPR & First Aid Certified, and even got the title of Canine Good Citizen through AKC for his rescue dog, Rusty.

Alexander is proud to be a part of the Joint Forces K9 family. No matter how difficult the problem, you can put your trust in Alexander to help you and the man’s best friend achieve your goal. Above is a picture of Alexander with his late father’s police K9 Dalka.

Bryan is an Oklahoma native who has spent most of his life in Arkansas. His passion for dogs has led him to a 5 year career immersing himself in animal health. This intense drive has only grown his love for them and has inspired him to pursue a lifelong commitment in mastering and training dogs. Bryan has joined the Joint Forces K9 team and is excited to become proficient in all aspects of training dogs for your every need.

Canine Behavior Specialist
Zach is a Northwest Arkansas native. Growing up in Rogers, he now calls Siloam Springs home. Zach always knew he wanted to work with animals and has been around them his whole life. For the past 6 years, Zach has enjoyed pursuing his passion for training dogs.

Zach graduated with a BA in Psychology, as well as a double minor in Biology and Business from Ouachita Baptist University. While getting his undergraduate degree he gained experience working with primates and learned how they are trained in a zoo setting. He is now certified as a Canine Trainer and Behavior Specialist from Starmark Academy. Dedicated and prepared to handle whatever training or behavior modification you might need, Zach is excited to work with your dog and be apart of the Joint Forces K9 team.

Dog Trainer
This is Adam and his dog Baby and his puppy bullet. Adam is originally from wine country in Lodi, California but recently decided to move to NWA to be closer to nature and pursue his dream of becoming a dog trainer. After 8 months of hard work and dedication, he finally achieved that dream and it is only the beginning for him! He spent 8 months studying and practicing dog training and canine behavior. He also underwent a mentorship for dog training right here at Joint Forces K9! He grew up always having working dogs on his family’s farmland and loved training and working with them. Every dog he or his family has ever owned has been a rescued dog and his passion has always been helping animals, so shortly after moving to Springdale, he rescued Baby from Springdale animal shelter. Bullet is Adam’s sport dog puppy and he has started training him in obedience, protection, narcotics detection, and agility and he is coming along amazing! His goal is to learn more about behavior modification so he can help animals that need it most!

My name is Rheonna Stayathome (yes, it really is stay at home). I am super excited to be a part of the Joint Forces K9 team! I’ve spent the last 6 and a half years at the Cherokee Casino here in Siloam. I decided that it was time for a change in scenery and JFK9 welcomed me with open arms. I’m originally from Stilwell, OK. Most of my family resides there, but I’ve been living in Siloam for about 4 years now. I am a mom to a little boy and he’s my world. I hope that I am able to raise him loving animals the way that I always have. Aside from being a boy mom, I also have 3 cats (Lola, Lucy, and Lulu) and a perfect little golden (Matilda). I’m currently pursuing a degree in psychology. With that, I’m hoping to better understand the way the mind works and working alongside animals to see exactly their positive effect on mental health. I am a huge lover of sports. I grew up watching football with my dad (Boomer!) and that’s something I love to do to this day. I love to learn and I love to grow and I cannot wait to see what opportunities JFK9 has to offer for me!

Felicia was born in a small town in Oklahoma and raised on a farm.  Growing up she was always surrounded by horses and many other different animals.  She learned to appreciate all of the animals that God brought into this world.  This is where her love of animals came from and what brought her to JFK9.  She hopes to one day instill the same love she has for animals in her children.  She is very excited about the new adventure and opportunities she has at JFK9.